#9 Arizona State has been the talk of the NCAA hockey tournament prognostication community in 2019. In their third year in D-I, the Sun Devils (19-10-1) are aiming to be the first independent team to earn an at-large tournament bid since Alaska-Anchorage in 1992. They are #9 in the PairWise Rankings (PWR) that mimic the NCAA’s tournament selection process. Their potential movement from that position is limited by having just 4 regular season games remaining and by not playing in a conference tournament (which, by the nature of tournament design, tend to be a drag on the PWR of teams that don’t win). 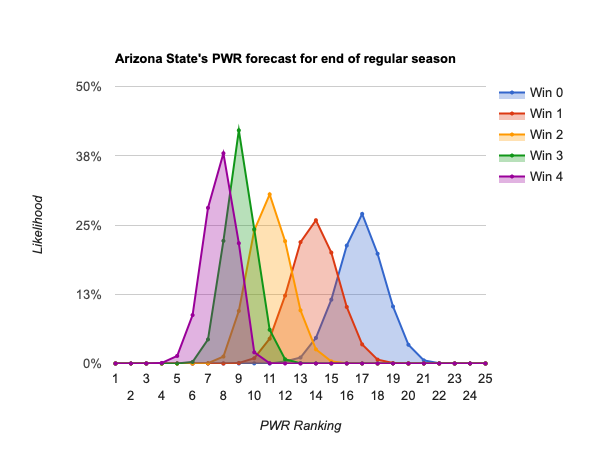 With so much NCAA hockey left to be played, the Sun Devils do not control their own fate. Arizona St could make, or miss, the tournament in any of their remaining potential season outcomes–from winning none of their 4 remaining games to winning all. But, their own performance across those 4 games does have a huge influence over which fate is most likely. Based on PWR simulations through the end of the regular season, here’s how Arizona State is likely to fare based on its own performance in its remaining games (summarized from Arizona St’s PWR Forecast page):

4 wins gives Arizona St just short of a mathematical lock on an at-large NCAA tournament invitation, with a likely end of season PWR between 6 and 9.

3 wins probably lands Arizona St between 7 and 11 at the end of their season, with the midpoints of 8-10 most likely. That would be very nearly a lock for the Sun Devils, as a huge downward plunge is very unlikely while idle, and it would take bad luck in the conference tournament results for the top 12-13 not to make the NCAAs.

2 wins probably lands Arizona St between 9 and 13 at the end of their season, with the midpoints of 10-12 most likely. In this scenario, the Sun Devils are still most likely to make the NCAAs. They need just a little bit of luck to make sure that they either land near the middle or top of that range or that most conference tournaments are won by high ranking teams (thus ensuring that #12-#13 in PWR get at-large bids).

With just 1 more win, Arizona State could find itself anywhere from #11-#17 at the end of their season (the range of possible outcomes is larger in this scenario, which is more dependent on other teams’ performance in the tight RPI range of teams 12-18). Making the tournament in this scenario is still entirely possible, as Arizona St has a greater than 65% of finishing #14 or higher even with just 1 more win. But, they would be firmly on the bubble with their fate in the hands of the cutline (that is, the lowest PWR rank that gets an at-large bid varies based on how many conference tournament autobids are won by lower ranking teams).

There are even remote scenarios in which Arizona State makes the tournament with no additional wins. In 1% of 0 win scenarios, the Sun Devils end up with a #13 PWR. In 4.6%, they end up #14. Those are long shot outcomes with no wins, on which the Sun Devils would need particular conference tournament results to get in from #13-#14, but are quite possible.

The above describes the most likely outcomes, based on simulations of all 181 games left in all teams’ regular seasons, so most accurately captures the effects that other teams’ outcomes might have on the Sun Devils. But, to better understand why Arizona State’s PWR will move based on its own outcomes, we can dive deeper into the PWR, and in particular RPI.

Playing with the PWR Calculator, winning any two of its remaining games (but losing the other two) lands Arizona State at #11.

Looking at the Arizona St PWR Details page, that outcome is reasonably predictable. Arizona St’s won comparisons to each Western Michigan and Mass.-Lowell can be flipped by flipping RPI alone, which is pretty close for all three:

To give you some idea of the magnitude of those numbers, the Arizona St RPI Details page reveals the approximate potential effects on Arizona State’s RPI of their remaining games:

(If you’re double-checking me on a cocktail napkin, you might note that the numbers above would result in Arizona State’s RPI being just slightly, .001, higher than Mass.-Lowell’s in its win 2 vs. American Int’l/lose 2 at Minnesota scenario. That’s because the RPI effects table isolates individual games so can’t be used to precisely calculate the effect of multiple outcomes and their effects on other teams; but, the PWR Calculator does an exact calculation for a scenario of any complexity and confirms that, all other things unchanged, Arizona State’s RPI would come out slightly below Mass.-Lowell’s once all the side effects of those games are included).

Again, starting with the PWR Calculator, winning 3 or 4 wouldn’t result in a climb for Arizona State (with no other games played) because there’s no easily flippable comparison above Arizona St. Though #8 Cornell only has a .5598-.5581 RPI lead, it wins the comparison 4-0, so flipping RPI alone wouldn’t flip the comparison. The comparison to #7 Denver hinges on RPI, but the Pioneers’ RPI of .5711 has a formidable gap over Arizona State’s .5581 (the game contribution RPIs from the section above show that 4 wins can move Arizona State’s RPI close to Denver’s, but it turns out not close enough).

Going back to the PWR Calculator, if Arizona State only wins 1, they will fall to #14 (with no other games played). That’s not surprising looking at it’s PWR Details page, because the Sun Devils are sitting atop a heap of 1-0 comparisons won by a reasonably tight RPI (#15 Bowling Green has an RPI of .5411).

Finally, one last visit to the PWR Calculator reveals that with no additional wins, Arizona State would fall to #18 (if no other NCAA teams played any additional games). Remember from our earlier look at Arizona St’s PWR details page that #12 Clarkson through #18 Notre Dame are separated by only .0107 in RPI, and that Arizona State’s PairWise Comparison win over each would flip away from the Sun Devils with a flip in RPI ranking.

I jumped to the bottom to find out if they’d make the tournament or not!

Probably. Like over a 99% likelihood if they win 3 or 4 of their remaining games. More likely than not if they win 2. A real tossup if they win 1. And in the neighborhood of 3% if they win 0.